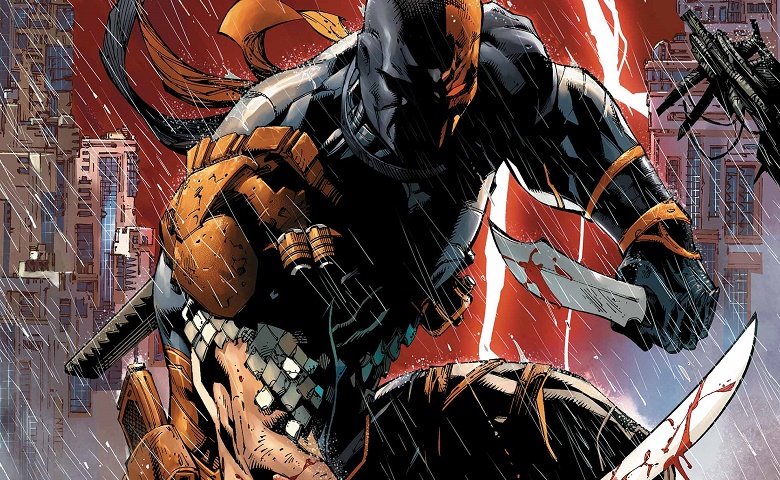 UPDATE: According to The Wrap, citing sources knowledgeable of the situation, Slade Wilson/Deathstroke will be the main villain in Ben Affleck’s Batman solo. Does this mean the film is already in production? Should we be expecting an official release date in the not so distant future?

Recently, rumors were swarming the film would be set in Arkham Asylum, and packed with villains. So it’s interesting that Slade is getting the first character reveal. Now we’re led to wonder if those rumors still hold any water. Let us know your thoughts and theories in the comments below.

Original Story: Ben Affleck has taken to social media to share a short clip of someone armored up in Deathstroke garb. It’s a video of a video, as Affleck’s camera is aimed at a screen, but he does pan out to show he’s on set. With the character typically being associated with the Teen Titans, this could indicate we’re looking at a Batman solo tease. However, Justice League is currently filming in London, so this may be in relation to the impending team up. Check out the awesomeness in the clip below.

To add to the cryptic nature of it all, Affleck didn’t offer any context. It’s just the video and nothing more. In all fairness, nothing more is necessary. This is plenty to get the wheels turning! But what actor is donning the suit? And why is Deathstroke in Justice League, if that is what the clip is for? Are Bruce and Diana looking to him as a potential League candidate? The mercenary’s skill set would certainly be beneficial. Though, it’s hard to imagine Batman wanting to work alongside a contract killer, but desperate times do cause for desperate measures.

If Deathstroke is a potential recruit, here’s to hoping the Bat’s doing the recruiting. Who doesn’t want to see those two going at it like they did in that fantastic Batman: Arkham Origins teaser?