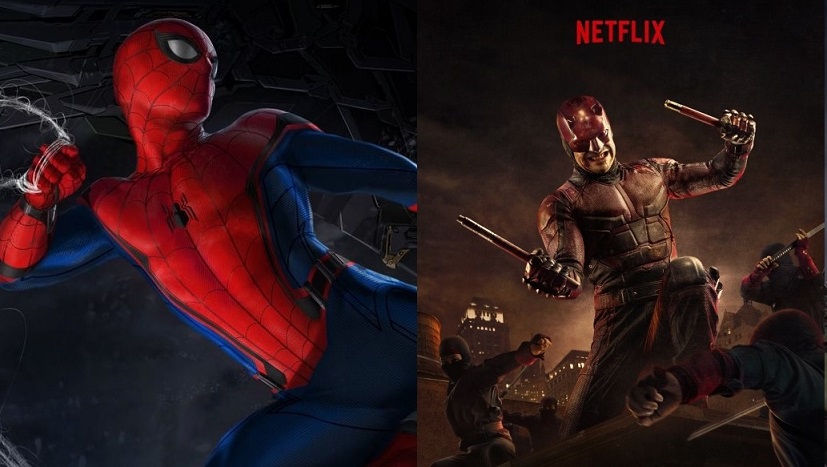 Ever since Netflix launched Daredevil to critical acclaim, audiences have been asking when, how, or where the streaming platform’s Marvel universe would bleed into the MCU. The small screen timeline often makes reference to the cataclysmic events caused by Cap and Co, but it has always appeared wishful thinking that Charlie Cox’s Matt Murdock would join the spandex smackdown.

With Spider-Man: Homecoming swinging onto our screens this July, producer Eric Carroll has been talking to Cinemablend about what he feels is an inevitable big-screen meeting. He told them:-

At this stage, as with any phase of this complex comic book jigsaw, it all remains conjecture as to whether any of this will actually happen. Charlie Cox has often spoken of his desire to see Daredevil team up with his cinematic counterparts, but has also reiterated that there have been no official talks.

There’s also the problem of weaving it into an already labyrinthine series of plot strands. Daredevil season three is on the horizon, and production is underway on The Defenders (the show that will unite Luke Cage, Jessica Jones, and Iron Fist into their own mini-Avengers unit), and this is just a snippet about the character being introduced to a Spider-Man franchise that doesn’t even know where it will be housed in a couple of movies time.

Sony honcho, Amy Pascal recently hinted that the super studio team up of Sony and Marvel might come to end after the Homecoming sequel, so where would that leave Daredevil? It makes our head hurt so much that we’re going to lay down in a Ben Affleck version of Matt Murdock style water tank, and file this one under ‘a pinch of salt’.