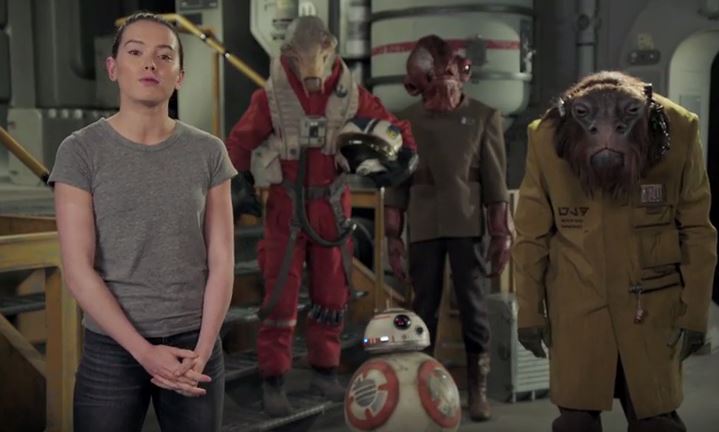 It’s that time of year again, Force fans – it’s Star Wars Day! To celebrate the occasion, Rey herself Daisy Ridley has appeared in a new “Force for Change” video on the official Star Wars Youtube channel to wish all the fans a very happy May 4th.

As well as Ridley, the fun little video also features guest appearances from BB-8, Admiral Ackbar and a couple of new alien creatures who will be first seen in the upcoming Episode VIII. Oh, and Ridley’s The Force Awakens co-star John “Finn” Boyega turns up too. Well, sort of.

For more information on the “Force for Change” fundraiser – which closes at 11.59pm on May 4th – read this description seen on UNICEF‘s website:

When you donate to the U.S. Fund for UNICEF in support of Star Wars: Force for Change, you will support UNICEF Kid Power and help children around the world grow up healthy. Kid Power is an innovative program that empowers kids to get physically active using the world’s first Wearable-For-Good. Built for a new generation of global citizens, Kid Power inspires kids to take action and help save the lives of children in developing countries with every step they take.”

Ridley will next be seen in a proper Star Wars production in Rian Johnson’s so-far untitled Episode VIII, which is due to hit cinemas on December 15th 2017. Meanwhile, spin-off film Rogue One: A Star Wars Story will arrive this December.

Image via The Walt Disney Co./Lucasfilm