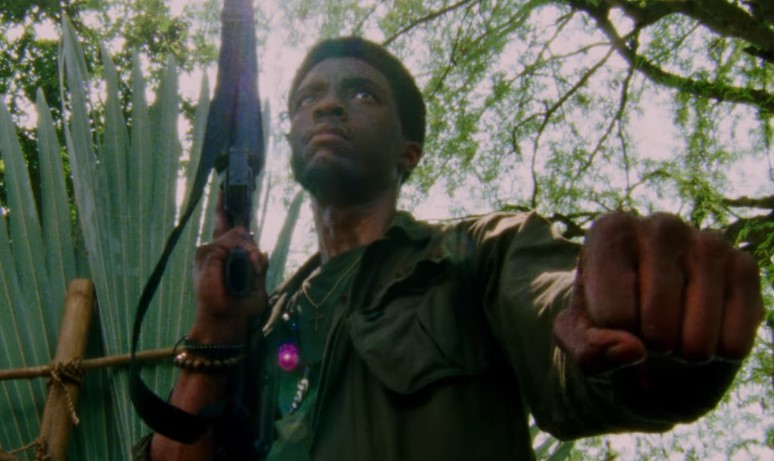 Spike Lee had gotten the attention of the Academy with his work on BlacKkKlansman, and now he’s teamed up with Netflix for a film set during the Vietnam War called Da 5 Bloods.

From Academy Award® Winner Spike Lee comes a New Joint: the story of four African-American Vets — Paul (Delroy Lindo), Otis (Clarke Peters), Eddie (Norm Lewis), and Melvin (Isiah Whitlock, Jr.) — who return to Vietnam. Searching for the remains of their fallen Squad Leader (Chadwick Boseman) and the promise of buried treasure, our heroes, joined by Paul’s concerned son (Jonathan Majors), battle forces of Man and Nature — while confronted by the lasting ravages of The Immorality of The Vietnam War.

From the get-go, you can see that the film has drawn a lot of inspiration from Vietnam-era war films, specifically Francis Ford Copolla’s Apocalypse Now. Even Jean Reno’s scene looks to be a stand-in for when the soldiers run into a French plantation in the film.

At the center of the film looks to be Black Panther star Chadwick Boseman. A lot of people had actually been worried about him back in April when he looked significantly skinny, but I think it’s safe to say that it was done for this role. Seeing as the Vietnam War was supposed to be hell for soldiers, it would make sense that Boseman’s character would look lean and starved.

Personally, I’m excited for the film. BlacKkKlansman was an interesting watch, and I want to see what Lee has to say when it comes to Da 5 Bloods. Catch it on Netflix June 12.