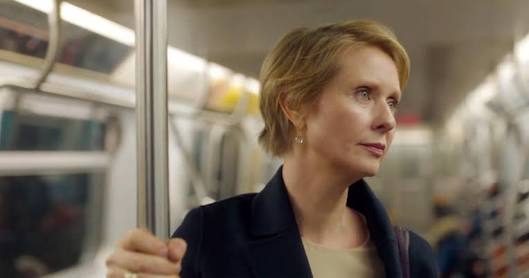 Without a doubt, the current political climate across the United States is at the very least worrisome. In a recent research, it was revealed that despite President Trump, the Republican presidential candidate, winning the elections, Republicans and Democrats alike have cited the future of the nation under his administration as a huge stressor.

Most Americans are looking towards this year’s gubernatorial elections to ease their worries about the current state of the country. While still a few months away, news surrounding the elections have been exciting – particularly in an equally exciting state – New York.

Yesterday, in a video posted on her social media channels, Cynthia Nixon has announced her big for the gubernatorial seat. Nixon, famous for her role as Miranda in Sex in the City,  grew up in New York City and is currently residing in the state with her wife, Christine Marinoni –  former education organizer for the New York City Department of Education.

In her campaign website, CynthiaForNewYork.com, Nixon explained why she is leaving her life as an actress for a position in the government. According to Nixon, she has lived in New York all her life. She knows very well that the people of the state deserve better:

“I’m running for governor because I LOVE THIS STATE. New York is the only place I’ve ever lived, and I wouldn’t have it any other way. But I know that we can do better. We need a New York that works for all of us – A NEW YORK FOR THE MANY, NOT JUST THE FEW.”

This is the first time Nixon has ran for office. Nevertheless, she has been very active in various political issues including lobbying for reforms in the state’s educational system – she has been a spokesperson for Alliance for Quality Education and has met up with legislators to ensure that every district’s public school system gets the budget that they need:

“Cynthia has been fighting for better schools and more equitable education funding all across the state, including as a spokesperson and organizer for the Alliance for Quality Education, which helped to reverse hundreds of millions in education budget cuts. Cynthia has traveled the state, met with legislators, and spoken out in Albany on numerous occasions to demand that public schools in every district get the resources they need, regardless of income level. “

In the same website, Nixon has expressed her very strong opinions about Andrew Cuomo, the incumbent governor of the state. She regrets her decision of voting for Cuomo:

“I voted for Andrew Cuomo because I believed he was a real Democrat. But since taking office, Governor Cuomo has shown us his true colors. He let the Republicans gerrymander their own districts to suppress Democratic voters, especially voters of color.”

Andrew Cuomo has yet to specifically comment on Nixon’s bid for office. However, in a recent function, Cuomo told reporters that he isn’t worried about anyone running against him. According to the governor, it is an election, he expects that there would be competition:

“I’m not nervous about whoever runs. There’ll be people who run. That’s called elections, and that’s fine.”

How do you feel about another celebrity running for a political office? Do you think she stands a chance?