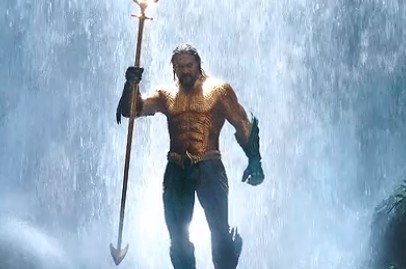 The DC Extended Universe’s Aquaman is scheduled to premiere in less than a month and fans of the franchise can barely contain their excitement for the release of the much-awaited adaptation.

Thankfully, critics have already seen the last cut of the movie and they are not shy about sharing their opinions about the movie. While coy about details and careful with spoilers, it seems like the James Wan’s feature gets a thumbs up from most industry insiders.

In a tweet, Screen Rant’s Andrew Dyce praised the movie calling it both beautiful and fun. According to Dyce, the film doesn’t apologize for what it is. He teases fans to expect a deluge of laughter and cheering especially in the second half of the movie:

“Aquaman is a breathtakingly beautiful, weird, badass, FUN idea of a modern superhero fantasy (anime) and makes zero apologies. Second half’s one cheer/laugh after another. Imagine ’80s Schwarzenegger starring in “Hideo Kojima’s AVATAR” and you’re most of the way there. #Aquaman” read the tweet.

Likewise, Comicbook Debate gushed about Aquaman. The critic praised DCEU director James Wan for his choices and commends the movie – calling it a blast:

“#AQUAMAN is an absolute blast! James Wan creates a thrilling story & makes a worthy entry in the DCEU Full of spectacle & highlighted by creatures of the abyss, Wan creates an engaging adventure. The heart/emotion of the film resonated most, amplified by strong cast performances” read the update.

The praises for Aquaman come as no surprise for most of the franchise’s fans. Considering how passionate Jason Momoa aka Aquaman himself is about the project, the stellar reviews isn’t all that shocking.

In an earlier interview with Entertainment Weekly, Momoa exclaimed about getting the part of Aquaman. According to the Hawaiian native, he is very proud to represent his people on screen. He thinks that he is perfect for the role and he is excited to show the feature to his kids:

“I feel like it’s an honor to represent my people, Hawaiians. I’m a brown half breed, and it’s pretty awesome. And this is the first thing my kids get to watch. I felt very loved. My kids can’t watch Game of Thrones. Maybe Stargate. [For Justice League they] got to go to the movie theater and see papa in movies and got to be there with me.”

He continues to explain that with Aquaman all he really wants to do is to make fans proud of their output:

“I have Aquaman in me, and he’s somewhere I don’t have to reach far to access. [Game of Thrones horselord] Drogo was harder to play, where I had to learn a different language and do certain things that I don’t think are right. I want to make Aquaman fans proud. A lot of the real Aquaman fans love him, and I love them for it. And some people don’t like him — my job was to kind of come in and make this guy cool. I was worried [at first] that maybe they wouldn’t like me. But they’ve responded really well.”

Aquaman is scheduled to be released across the country on December 14, 2018.