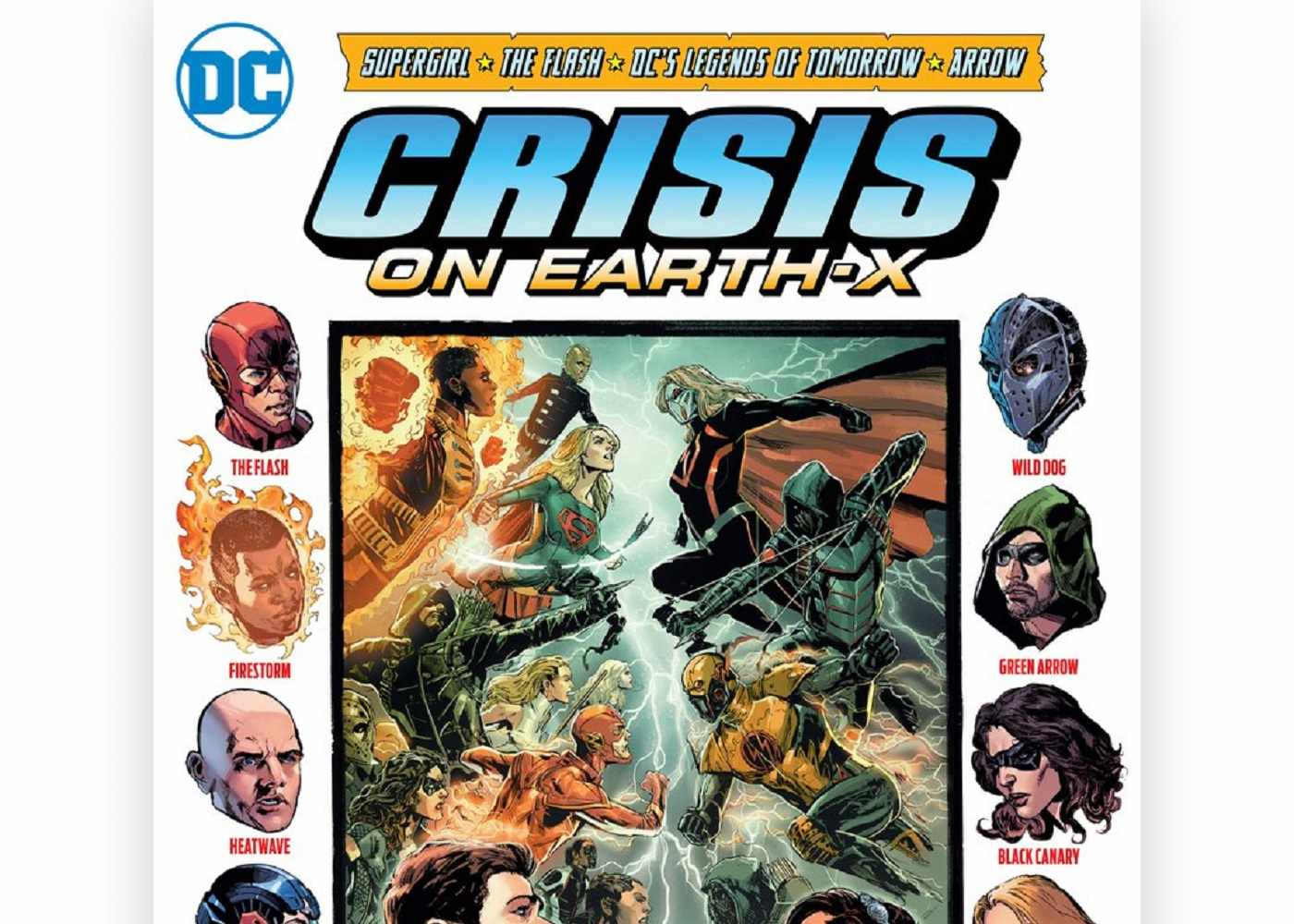 Our speculation can end. The CW has revealed both the title and the premise of the annual crossover between its four superhero shows through a one-shot posted to the shows’ Twitter accounts. Crisis on Earth-X, a four-part event over two nights.

(Some Arrow spoilers ahead, be warned.)

Crisis on Earth-X, the 4-part crossover event, begins November 27 on The CW! pic.twitter.com/kaiRjK51Ki

There’s a lot to unpack in their teaser image, so let’s have a closer look and dig into it. 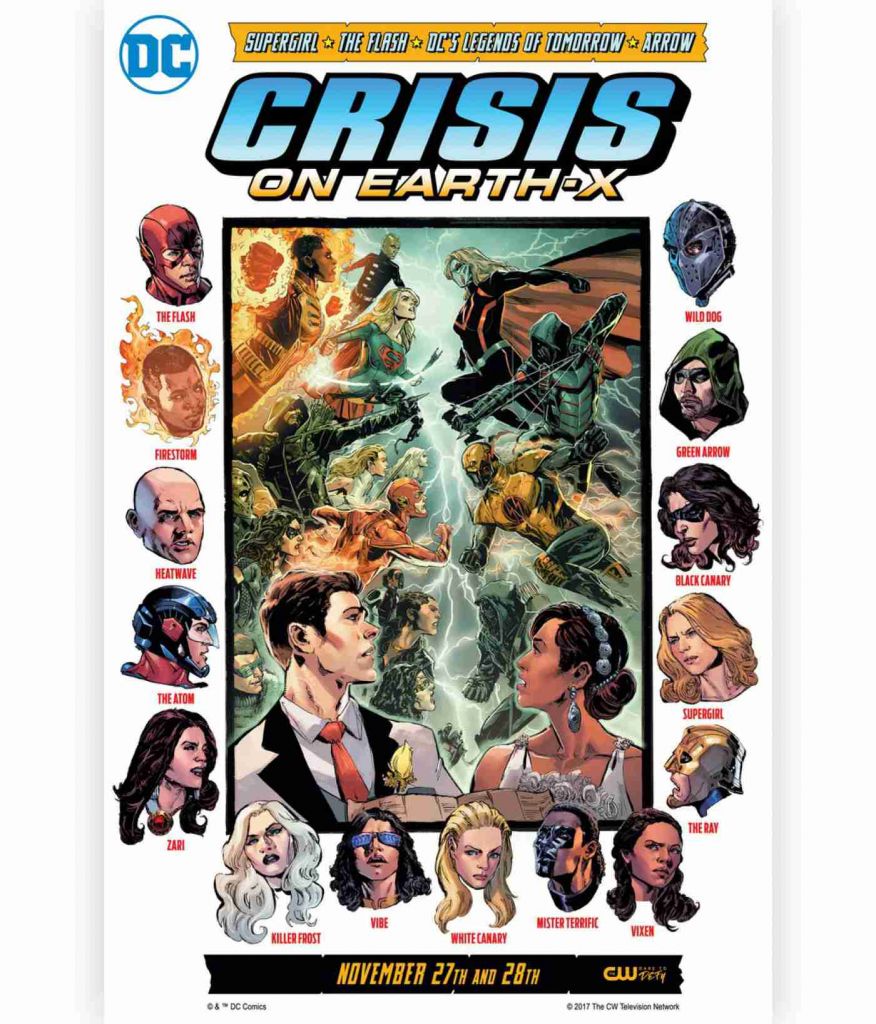 What is Crisis on Earth-X?

The crossover takes its inspiration from a 1973 comic crossover between the Justice League and Justice Society, in which members of both teams found themselves on an alternate Earth where the Nazis won World War II, and a team called the Freedom Fighters battle to stop them.

The teaser image heavily homages these Silver Age crossovers between the heroes of Earth-1 and Earth-2, whose covers typically featured the heads of the various heroes around the borders, as we see here. The title font owes more to the 1986 mega-crossover Crisis on Infinite Earths, but the remainder of the image is classic JLA/JSA all the way down.

Notable among the pictured heroes is the star of the latest animated series on the CW Seed, Freedom Fighters: The Ray. A classic member of the Freedom Fighters, the Ray’s series debuts online this fall, and it appears to be key to the crossover. Not only is the Ray listed as one of the characters, the combined heroes of Supergirl, Flash, Arrow, and Legends of Tomorrow are heading to his Earth, where they’ll find evil, Nazi versions of themselves.

Hard to miss at the bottom of the poster are Barry Allen and Iris West in wedding garb. Barry and Iris got engaged (twice) in the back half of The Flash’s third season, and it looks like whatever is drawing everyone to fight their evil doppelgangers might be interrupting the wedding.

Will the wedding be delayed through the back half of season four? Will it only be delayed until The Flash’s fall finale the following week? Or will the nuptials take place on the crossover episode of Legends of Tomorrow, allowing all of Barry’s super-friends to attend?

Some Arrow fates revealed, some not

Among the collected heroes in the poster are characters whose fates have been up in the air since May. Arrow’s fifth season ended with Green Arrow’s entire supporting cast possibly being killed in an explosion, and the network has kept a tight shroud of secrecy on who did or didn’t survive. While we’ve known for a while that Juliana Harkavy would be returning this season as the new Black Canary, the fates of the others were less clear. But there in the borders are Team Arrow members Wild Dog and Mr. Terrific, so unless their Earth-X doppelgangers are members of the Freedom Fighters, looks like they survived the explosion as well.

Conspicuous in their absence, however, are Oliver Queen’s closest friends and allies, John “Spartan” Diggle and Felicity “Overwatch” Smoak. Those two have played a major part in every Flash/Arrow/etc. crossover to date, so their absence from the poster could rightly be cause for alarm.

Who’s that over Barry’s shoulder, in the lower left? Looks a lot like Flash nemesis and former Waverider crewman Leonard Snart, aka Captain Cold. While Captain Cold has been confirmed as returning in a recurring role on Legends of Tomorrow this season, seeing him in the crossover was unexpected. Also, the villains appear to have two archers on their team. One will surely be Earth-X’s Oliver Queen, but who is the other? A doppelganger of one of Oliver’s bow-wielding nemeses, perhaps? John Barrowman’s Malcolm Merlyn? An alternate Deathstroke? Or will Prometheus be making a posthumous return?

Or maybe they simply used evil Oliver twice to balance out the image. We’ll have to wait and see.

Crisis on Earth-X kicks off on November 27th.