Skip to content
Home » Could [Spoilers] Still be Alive on ‘Arrow’? 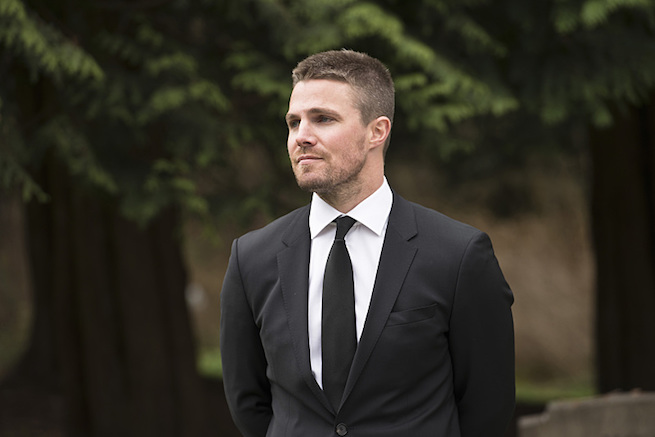 Beware of spoilers if you aren’t caught up on season 4 of Arrow.

Still reeling from Laurel being the body in the grave? Frustrated that she was finally becoming awesome and then ‘Bam!’ no more Black Canary? This news may or may not alleviate said frustration, especially if it doesn’t come to fruition in the end, but one can certainly hope.

The CW has released the official synopsis for Arrow’s 19th episode, entitled Canary Cry. Apparently, someone in Star City has seen the Black Canary, post the events on episode 18 where the heroine was killed by Damien Darhk. The synopsis offers no hints as to who witnesses this strange sighting, but whomever it is has Quentin Lance convinced his daughter isn’t dead.

“Oliver (Stephen Amell) and the team struggle to come to terms with Laurel’s (Katie Cassidy) death, especially Diggle (David Ramsey) who is overwhelmed with guilt for choosing to believe Andy (guest star Eugene Byrd) had changed. Meanwhile, Lance (Paul Blackthorne) refuses to believe his daughter is really gone and asks Nyssa (guest star Katrina Law) to help bring her back. A recent Black Canary sighting in Star City only seems to prove his theory that Laurel isn’t actually dead.”

The Arrowverse is ripe with ways in which Laurel could be brought back–except maybe the Lazarus Pit; that was kind of destroyed. But this is a comic book universe, and we are talking about an aspect of Ra’s al Ghul’s lore, so the existence of other Lazarus Pits isn’t off the table. Unfortunately, we’ll have to wait a couple of weeks to find out when Arrow returns from its short hiatus on April 27.