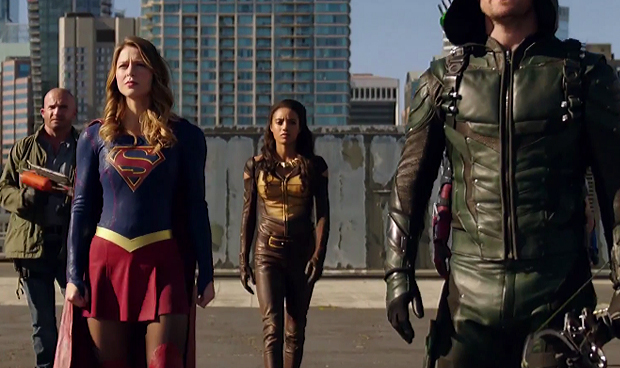 All of the Arrowverse shows have officially debuted their Fall premieres. While fans debate over which premiere was best (Supergirl and Legends seem to be in the running), the anticipation for the upcoming crossover continues to build. To add to the hype, Arrow and Legends of Tomorrow EP Marc Guggenheim has teased what fans should expect when the crossover airs. We know alien baddies The Dominators are what brings all of our heroes and misfits together. The Dominion was the main antagonist, leading the Alien Alliance, in the Invasion! story event in the late 80s. According to Guggenheim’s recent interview with EW, what we’ll see on TV come this December will be faithful to that classic tale.

“I will say that their goal is very closely related to what was established in the comics, and it does have to do with metahumans,” he told EW’s Superhero Insider. “It’s very, very faithful to the comics.” With a name like Dominators, it’s no secret they’ll likely arrive to take over the World. But will we see Gene Bombs and Martian Manhunter thievery via telepathy? We can’t wait to find out.

Guggenheim continues, explaining why this crossover event is on a much larger scale than those of the past.

“I think it’s massively different. The first crossover we did was two separate storylines that had a slight tangential connection to each other. Then last year, the crossover we did was a two-parter that told one complete story with a beginning, middle, and end across Flash and Arrow, but it also had the work of setting up Legends of Tomorrow.”

“This year, we’re doing by far the most ambitious crossover we’ve ever done. It’s basically a huge three-part story that also brings in Supergirl, so it’s crossing over all four shows. It’s telling one big epic movie of a story. It’s not setting up any other spin-offs, it’s just big, bombastic, huge action. There’s also some really poignant character moments. There’s a lot of plot lines, particularly I would say in Flash and Legends, that come to fruition in the crossover. It’s by far the most ambitious thing we’ve ever attempted. I want to say it’s by far one of the most ambitious things anyone in network television has ever attempted. It’s completely insane.”

The man behind the Arrowverse, Greg Berlanti, previously made note of the fact that Supergirl would not actually kick off the crossover. While her show will have “some characters who show up,” The Flash will be where it all begins. How this will actively come together is a mind warp those within the production have yet to reveal. Whatever is planned, it’s sure to be exciting. Tell us your thoughts and theories in the comments below.