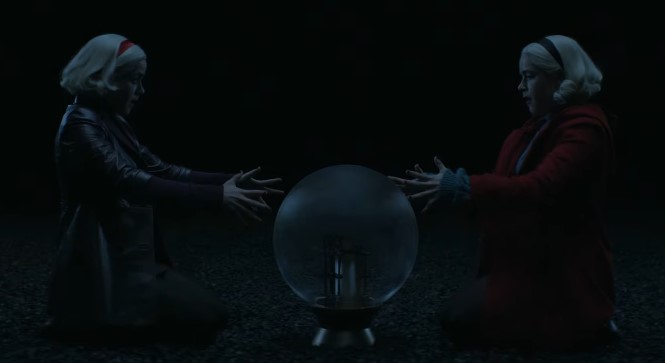 Chilling Adventures of Sabrina may be cancelled on Netflix, but at least we still have one more season of the show to wrap everything up. Just in, Netflix has dropped a new trailer, plus the premiere date for Sabrina’s last hurrah.

If anything, the Netflix trailer has a lot of what we’ve come to expect from Chilling Adventures. Besides all the satanic witch rituals, the show is also chock-full of teen romance and angst. Besides that, we also get the return of the other Sabrina, who has come to existence thanks to some wibbly-wobbly timey whimey magic.

While I don’t really expect Sabrina to be fully grown by the end of it, we should at least see a meaningful end to her arc all about growing up.

Back in July when it was announced that the show was cancelled, showrunner Roberto Aguirre Sacasa had said in a statement (via TV Line):

“Working on Chilling Adventures of Sabrina has been an incredible honor from Day One… The cast, beginning with Kiernan as everyone’s favorite teen witch, has been an absolute joy. I am beyond thankful to the crew, writers, editors, assistants, and everyone for pouring so much love into this dark dream of a show. I’m also grateful to our partners at Netflix, Warner Bros., Berlanti Television, and Archie Comics for letting us tell the story we wanted to tell, the way we wanted to tell it. We can’t wait for everyone to see Part Four.”

Catch the final season of Chilling Adventures of Sabrina when it premieres on Netflix on New Year’s Eve Dec. 31.