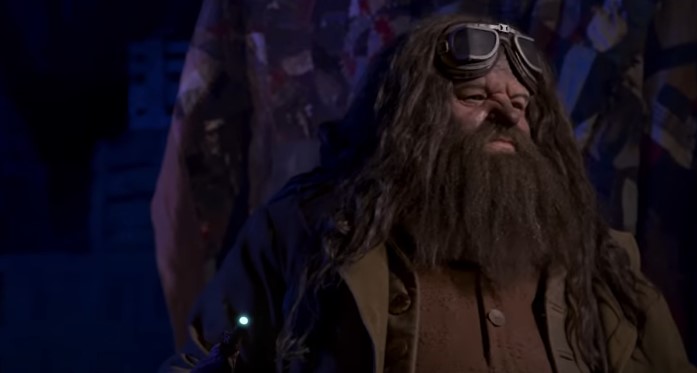 It has been announced for a while that Universal Orlando Resort was coming up with a ride with Harry Potter’s Rubeus Hagrid in the spotlight, and now they’ve released their first promo for Hagrid’s Magical Creatures Motorbike Adventure.

On June 13, 2019, Hagrid’s Magical Creatures Motorbike Adventure – the epic new addition to The Wizarding World of Harry Potter – will soar into Universal Orlando Resort and become the most highly themed, immersive outdoor coaster experience. It will also give fans the first-ever opportunity to join Hagrid – one of the most beloved characters in the Harry Potter films – on a journey through the Forbidden Forest. Here is a first look at your Care of Magical Creatures professor inside the new experience.

I’ll admit the animatronic does bear a strong resemblance to actor Robbie Coltrane, but I have to say they have to do something about those eyes. I mean, you can’t see the whites in them, and when you look at it, they look dead and black.

Though the Wizarding World franchise is trying to ride on the Fantastic Beasts franchise for now, Crimes of Grindelwald has admittedly left a bad taste in the mouth. The good news is, fans still love the OG Harry Potter franchise, and no amount of poor spinoffs are going to ruin that.