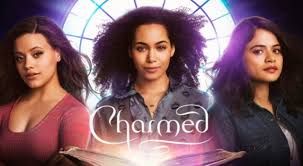 The CW announced a Charmed reboot early last year. Since then, there have been opinions flying around about the return of the well-love WB series. A year later, the network released the official trailer for the show and it is quite evident that this version is a far-cry from the original.

In the trailer, you see sisters, Melanie and Maggie Vera, played by Melonie Diaz and Sarah Jeffrey, living with their mother, Marisol, attending college and living a relatively normal life. Unfortunately, their simple quiet lives were shattered by a tragedy. The show begins with the death of their mother and the introduction of their older sister, Macy, played by Madeleine Mantock. Their powers emerge and the sisters find themselves defending the world from evil forces:

“This fierce, funny, feminist reboot of the original series centers on three sisters in a college town who discover they are witches. Between vanquishing supernatural demons, tearing down the patriarchy, and maintaining familial bonds, a witch’s work is never done. It’s a lot to take in, but ultimately the sisters accept their new destiny as The Charmed Ones … and their new duty to protect humankind from the demons that walk among us … one of whom killed their mother. With the Power of Three, they are stronger together … even if they have no idea what they’re really up against.”

The reboot was confirmed in January of last year. Admittedly, the fans of the original show are skeptical about the return of  Charmed to primetime. In fact, even the cast and crew of the show have expressed their disapproval. Holly Marie Combs, the actress who played Piper Halliwell on the 1998 – 2006 version of the show, took her opinions to Twitter. According to the actress, the reboot feels very disrespectful. She thinks it would only capitalize on something that they worked hard on:

“Here’s the thing. Until you ask us to rewrite it like Brad Kern did weekly don’t even think of capitalizing on our hard work. Charmed belongs to the 4 of us, our vast amount of writers, crews and predominantly the fans. FYI you will not fool them by owning a title/stamp. So bye” read her tweet.

Even Shannen Doherty, who was only on the show for three seasons, explained in an interview late last year that a reboot for Charmed would not be a good idea. However, working on the Heathers revival, the actress feels like it is too soon for Charmed to get a reboot:

“It’s not happening. I mean, I just don’t ever foresee it happening now.” Why? “It would be far too soon, but I also don’t think you need the original cast for a reboot. I know our fans really want us back, but who knows? We were basically a reboot of Practical Magic in its own way, so they could redo it, but now it should just rest.”

Thus far, The CW has yet to announce when the Charmed reboot would hit the screens. However, the network assured excited fans that it would be this year, sometime around fall.