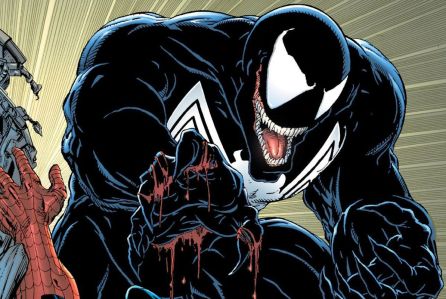 Filming for Marvel’s next full-length feature, Venom, is in full swing. In fact, the titular star, Tom Hardy, has very recently flown to San Francisco in order to shoot more scenes for the film.

Despite the robust filming schedules and ample behind the scene images, not much about the movie has been confirmed. To date, only one official picture has been released and only Tom Hardy, Michelle Williams, Riz Ahmed, Jenny Slate and Woody Harrelson have confirmed their participation in the movie. Thankfully, it seems like Eddie Brock himself has let some information surrounding the plot of the film slip. Of course, this was met with much excitement from the fans.

Recently, Tom Hardy posted fan art on Instagram depicting the villain Venom might go up against. The now deleted update heavily implies that Carnage would be featured in the upcoming film.

Carnage, otherwise known as Cletus Kasady – a sadist with homicidal tendencies, is a fan favorite amongst followers of The Amazing Spider-man comics. In the series, Kasady is a bad guy from the get-go. He is a serial killer who murdered several people including his own grandmother. His crimes eventually land him in jail with Eddie Brock as a cellmate. While in jail, the Venom symbiote allows Brock to bust out but not without consequences. A part of the symbiote is left behind, transforming Kasady to Carnage.

Neither Hardy nor the director of the film or the rest of the cast, Ruben Fleischer, have confirmed or denied Carnage being the main villain in the Venom movie. However, fans need not be disappointed. According to other reports, a friendly neighborhood superhero is guaranteed to make an appearance in the movie.

In an interview with Collider Movie Talk, Jon Schnepp, a Hollywood insider, revealed that Spider-Man would definitely be the Venom feature:

Schnepp is due to appear in a video on Collider’s Youtube channel this week. In a recent tweet, he advises Venom fans to watch out for the upload. He intends to reveal more information about the feature:

I will clarify my #VenomMovie #Venom information tomorrow on @ColliderVideo #ColliderHeroes so check it out, it’ll be up around 2pm on the @youtube channel.

The involvement of Spider-Man in Venom might mean that the character might eventually make an appearance in the Marvel’s Cinematic Universe. Nevertheless, executives representing the production of Venom has yet to respond to any of the recent rumors. The movie is due to come out in theaters in a few months. The premiere of Venom is scheduled for the fifth of October this year.