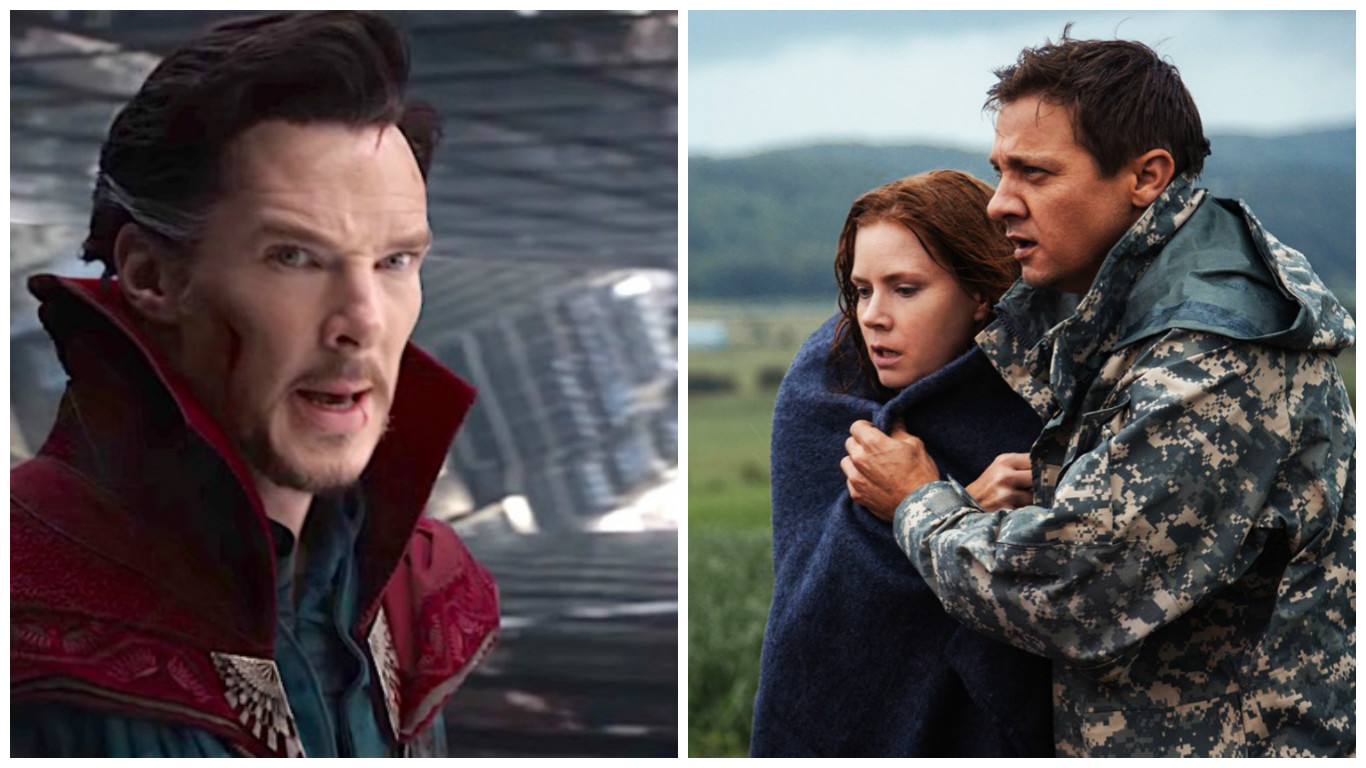 In a weekend full of winners at the box office, Doctor Strange held the number one spot.  But the news across the board was strong for nearly every film currently playing, as well as for newcomers Arrival and Almost Christmas.  Only new release Shut In was left in the cold.

Retaining its number one position, Marvel’s latest blockbuster Doctor Strange had one of the best first-to-second weekend declines of among other MCU releases, save for Thor (2011) and Iron Man (2008).  Sliding only 49% from last weekend, the origin story snagged $43 million, pushing its cumulative to $153m.  At this trajectory Doctor Strange could conceivably earn $240m+, all depending on whether or not it can continue to hold this well.  That may be a bit problematic starting next weekend when Fantastic Beasts and Where to Find Them becomes the hot new ticket in town.  Strange also added an additional $60m overseas this weekend for a worldwide total of $492m.

Taking second place again, Trolls only lost just under 25% of its business from last weekend and drove in another $35 million.  This is an awesome hold no matter which way you slice it.  The family toon has ballooned its gross to a very healthy $94m.  The film should also hold up well over Thanksgiving.  Trolls has a worldwide total of $222m so far against a $125m budget.

Opening in third place, Paramount’s alien invasion thriller Arrival peaked audiences’ interest to the tune of $24 million this weekend.  The film had two strong leads in Amy Adams and Jeremy Renner, as well as fantastic reviews from critics.  Audiences that saw the film were somewhat less ecstatic as they awarded the film a moderate ‘B’ Cinemascore.  This is the best opening weekend yet for director Denis Villeneuve, improving on the $20m opening of Prisoners.  Arrival could ultimately see a $75m total against a $47m budget.

Almost Christmas kicked off the holiday season with a modest $15.5 million.  This is a fine result for the $17m-budgeted picture, but is by no means a surefire hit like The Best Man Holiday (2013).  It may hold well in the coming weeks, possibly getting to the $45-50m range by the end of its run.  That would still be profitable for Universal Pictures.  Almost Christmas earned mixed-negative reviews from critics, but audiences certainly responded to it – giving the film an ‘A-‘ Cinemascore.

Hacksaw Ridge dropped down to fifth place, but managed to have a spectacular hold – with a dip of only 29%.  The war film from director Mel Gibson has been getting some great word-of-mouth (please check out my review here, and then go see it!), and earned an additional $10.7 million over the weekend.  This pushes the total to $32.2m for Lionsgate/Summit.  Expect the film to hold well, getting to $50m before awards season really kicks in.

Of final note, Shut In opened wide this weekend, but earned terrible reviews from critics that saw it, and a ‘C’ Cinemascore from audiences.  The Naomi Watts-thriller earned a meager $3.7 million and is not likely to make $10m by the time it exits theaters.

Next weekend, the world of Harry Potter returns to cinemas in the form of the new spinoff series Fantastic Beasts and Where to Find Them from returning director David Yates.  Expect a huge weekend turnout.  Other openers include the boxing drama Bleed for This and the teen drama The Edge of Seventeen.  Ang Lee’s latest Billy Lynn’s Long Halftime Walk will also see a nationwide expansion.