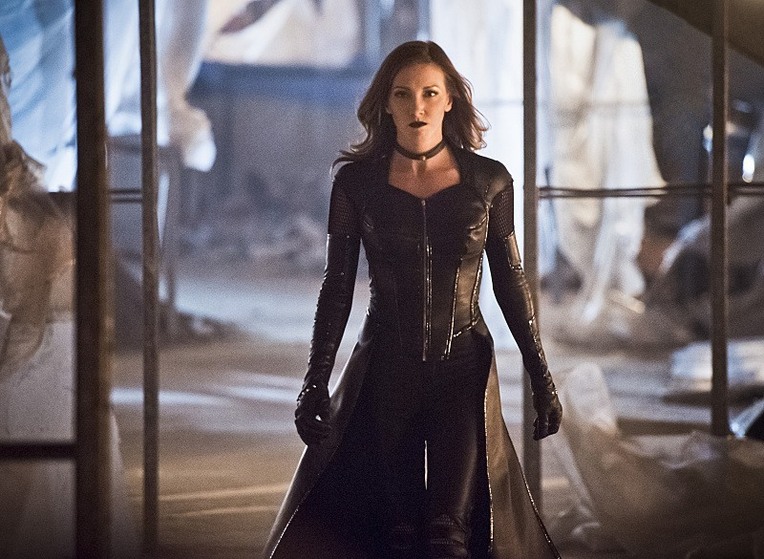 The last we saw of Zoom was at the end of the latest episode, The Runaway Dinosaur, where the diabolical Earth-2 Speedster was still hell bent on taking over Earth-1’s Central City. In making preparations to do so, audiences got a brief glimpse of the terror squad the villain had formed to go about the siege and conquering of the city. In that brief glimpse, Katie Cassidy’s Black Siren may or may not have been present. With the following images released for The Flash Season 2’s penultimate episode, Invincible, we get to see Black Siren in all of her glory, alongside Zoom and a couple of other surprising Earth-2 villains. Beware, if you haven’t caught up on the latest episode, spoilers may follow.

Before we get excited over how amazing Katie Cassidy looks, let’s take a moment to pause and ponder a few things. First, how are we seeing Reverb and Killer Frost if they’ve both been killed by Zoom? The Reverb question will probably remain in the air until the episode goes live, but at the end of last week’s, Zoom did ask Earth-1 Caitlin if she would be willing to join him. Of course, he was intimating her rise to villainy, just as her Earth-2 counterpart had become Killer Frost. Fans are already speculating Caitlin may pretend to side with Zoom, in an effort to garner more intel and a possible advantage for Team Flash, so she may be the Killer Frost from the images above.

Second, what is Flash doing in Wally West’s car? Is Wally working with the team now? Last week, it seemed Joe sort of let him in on Barry being the Scarlet Speedster, so as always with this show, anything is possible. Third, Just how well do Black Siren and Zoom know one another? Typically, when we’ve seen him roughing up his cronies, he’s fully masked and using the demonic Tony Todd voice, but in the images above he’s an unmasked Hunter Zolomon. Perhaps, she’s his right hand, or maybe she’s one of the meta-humans he’s hired that’s effectively doing her job and being rewarded, unlike the others.

Back to how great she looks! Dare we say this look is a bit more fitting than the Black Canary get-up she donned for nearly two seasons of Arrow? Here’s to hoping she won’t be killed off, like the other metas before her. If she shines, which she should, and survives whatever is about to go down, maybe she can return in Season 3. For now, fans will get to enjoy seeing Katie Cassidy in action once again when Invincible airs on May 17 at 8pm ET.