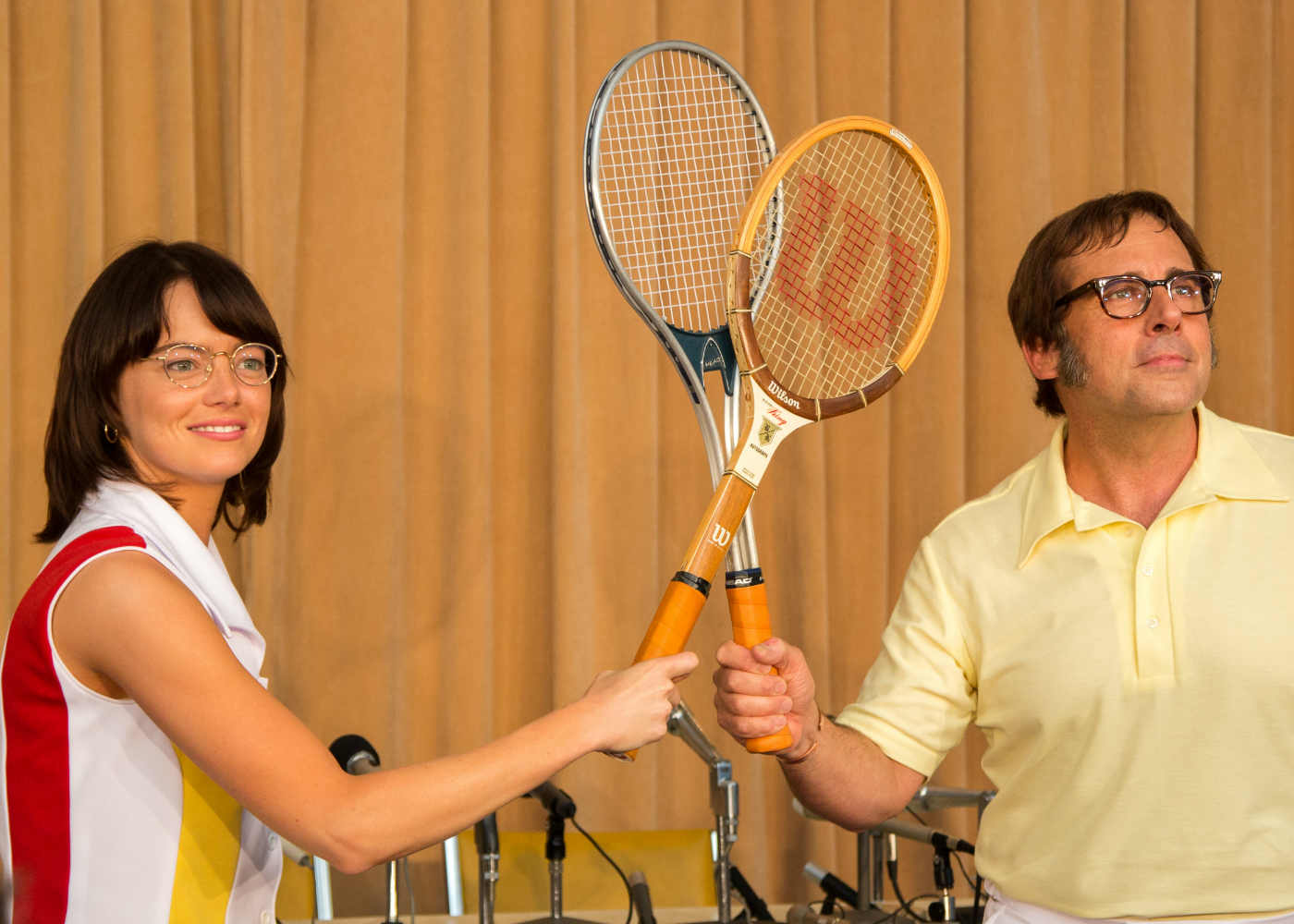 There are so many astonishing elements to be found in Jonathan Dayton and Valerie Faris’s Battle of the Sexes, none more so than the fact a tennis match took place in 1973 between pioneering world number one ladies tennis player, Billie Jean King (Emma Stone), and a 55 year old former major champion and full-time hustler, Bobby Riggs (Steve Carell), for a prize of $100,000, which meant so much more than the monetary value placed upon it.

The most indelible impact made by Battle of the Sexes is that even with this game-changing match having happened, with all its chauvinistic nudge-nudge asides, and promises of change, we’re still having the very same conversations today, particularly where Hollywood is concerned.

The importance of Battle of the Sexes cannot be underestimated, especially when you consider that this series of ludicrous man versus woman matches, whilst groundbreaking within the context of the films timeline, is being released at a time when some golf clubs still ban female members, and it’s only recently that women’s tennis has achieved parity with their male counterparts when it comes to prize money. Something that Billie Jean King started too long ago for these things to still be an issue.

In that regard, Battle of the Sexes is a straight-down-the-middle ace, but as a piece of entertainment it’s something of deuce.

The characters have depth in a way that you might not expect from a sports movie. They can often manifest as a Wikipedia re-enactment or basic mimicry, but here they’re layered in a fashion that makes them so much more than gender representation used to underline a point long-overdue.

Emma Stone’s Billie Jean King is a strong woman, who never flounders in the face of societal or gender pressure. The Academy Award winning actress carries off all aspects of her personality, convincing both on-and-off the court as a woman seeking change. She isn’t a rabble-rouser, or soap box stander, just a normal woman fighting for what’s right. At one point she’s asked “You’re a feminist, right?”, to which she retorts “No, I’m a tennis player who happens to be a woman”. It perfectly surmises the film’s mission statement.

Her opponent is possibly the biggest surprise, because rather than just portray Riggs as the sexist pantomime showman, Simon Beaufoy’s script paints him as very much dependant on his own wife (Elisabeth Shue). It’s a complex, rather sad performance from the excellent Carell. It still affords him some grandstanding though, with an alcoholics anonymous meeting getting decent belly-laughs in a film which plants a smile on your face rather than a forehand smash to the funnybone.

Also featuring in a starry line-up is the likeable Austin Stowell (Colossal), who sidesteps the soapier elements of the story as King’s forward thinking husband, an absolutely terrific Sarah Silverman as the ladies marketing manager – “you do the tennis, I’ll do the smoking” – and Bill Pullman as the deliciously vile head of the Lawn Tennis Association.

As for the tennis, sensibly there isn’t really that much of it. Sport recreation has never sat well on the screen, but what little is saved for the final showdown, and it’s realistic in a way that utterly convinces.

Combining a never-more-relevant social commentary, with genuine crowd-pleasing entertainment, and terrific performances from the cast, Battle of the Sexes isn’t a total grand-slam, but a piece of important history worth rallying around.