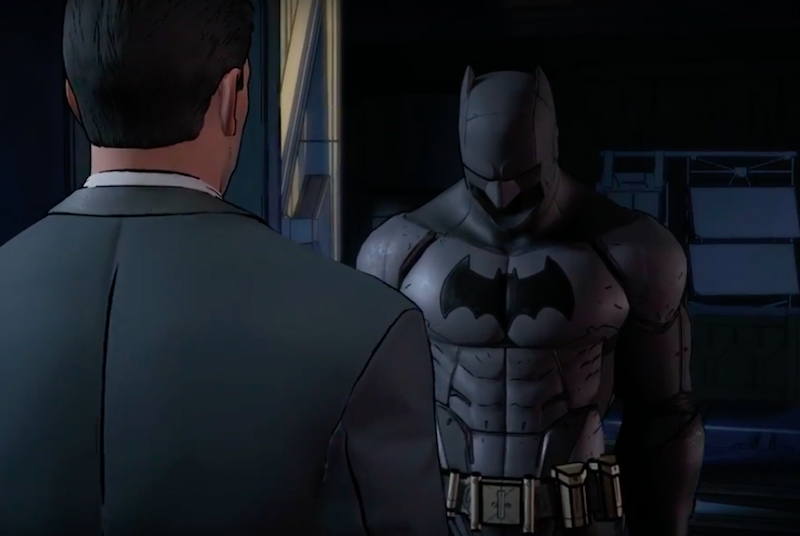 A trailer for Batman: The Telltale Series has finally been released. The two minute quick look offers fans a glimpse at a corrupt Gotham and the Batman trying to save it.

Gordon seems like he’ll be a friend to Bruce; however, his stance on the Bat will be in question. Yes, he’s typically ally, but Telltale is veering from canon a bit. Perhaps that relationship will be put to the test.

Since this is a Telltale title, choice will play a major factor. Because Harvey Dent’s campaign is getting support from Bruce, the latter may have influence on Dent’s professional relationship with Carmine Falcone. At least, that appears to be the case from the trailer and Alfred’s speech.

At E3, press lucky enough to get their hands on the game lauded Bruce Wayne as the highlight. It’ll likely prove true, as Telltale has stated emphasis will be placed on both Bruce and Batman. This fascinating duel nature of the character has yet to be fully explored in games. Meanwhile, “Be the Batman” has previously been expertly tackled.

“Enter the fractured psyche of Bruce Wayne and discover the powerful and far-reaching consequences of your choices as the Dark Knight. In this gritty and violent new story from the award-winning creators of The Walking Dead – A Telltale Games Series, you’ll make discoveries that will shatter Bruce Wayne’s world, and the already fragile stability of a corrupt Gotham City.”

Episode 1: Realm of Shadows launches digitally on August 2. A physical version will hit store shelves on September 13 in North America and September 16 in Europe.