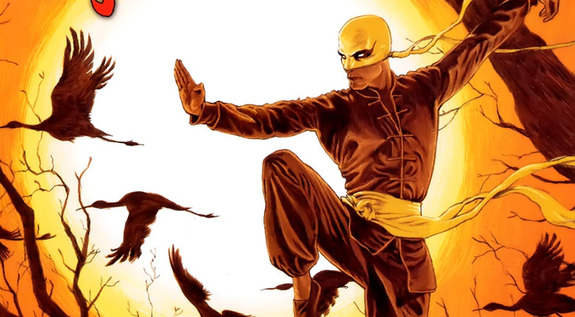 We’ve already seen Finn Jones as barefoot Danny Rand filming in the streets of downtown New York. Those first images only gave us a sneak peek at the look audiences can expect the hero to don when not in his Iron Fist garb. Below, check out the new set photos that have emerged of the actor in a bathrobe while practicing his kung-fu mastery.

Truthfully, this may only be Jones captured on set while training and not actually filming for the upcoming show, but it is still cool to see him in some kind of action. The wait for Iron Fist will be a long one since the series will not hit Netflix until sometime next year. We’ll also get a look at the magical-power wielding kung-fu master as part of the ensemble in The Defenders, which according to Daredevil actor Charlier Cox, is scheduled to begin filming sometime later this year.

Joining Finn Jones on the series is also Jessica Henwick as martial artist Colleen Wing and Jessica Stroup and Tom Pelphrey as siblings, Joy Meachum and Ward Meachum. Iron Fist is one of six Marvel series to stream on Netflix alongside Daredevil, Jessica Jones, Luke Cage, The Defenders and the recently announced Punisher spin-off.

The show will follow Danny Rand as he returns home to take on a criminal element working to corrupt New York City. To battle said element, the hero will use his mastery of kung-fu and his extraordinary ability to summon the fiery power of Iron Fist.

Iron Fist is slated to begin streaming sometime in 2017, though an official release date has yet to be revealed.