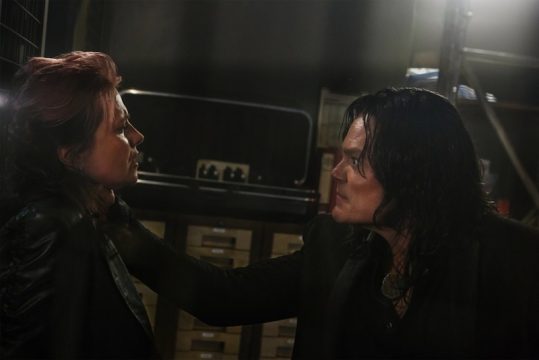 You would think summoning Ruby (Lucy Lawless), a “Dark One” responsible for creating the Necronomicon (the source of all of Ash’s deadite troubles) would be enough for our chainsaw-wielding hero. But, as the Season 1 finale revealed, Ash Williams (Bruce Campbell), like the rest of us just wants to cruise and booze with his pals. Who can blame him? If only that hadn’t involved allowing Ruby to let loose the legions of Hell on earth as a part of that deal. Hind sight is 20/20, they say.

However, season 2 of Ash vs Evil Dead manages to up the game, bringing in a villain of Biblical proportions; quite literally. Maybe you aren’t familiar with the ancient Canaanite deity made infamous by some of the writers of “the Good Book,” but according to We Got This Covered, Baal will be Ash’s next big problem. (Zuul. Baal. What’s up with ancient evil gods and doubling-up on the consonants?)

The season 2 trailer reveals Ruby has realized the forces of evil aren’t so easy to control. She decides she must summon Ash for help — a decision she partly regrets — and presumably Baal is a major reason why. You can watch the trailer below for more of what Season 2 holds.

On another note, not only do fans of Ash vs Evil Dead get more Ash action starting in October, but the show is now free to reference Army of Darkness. Apparently, a studio conflict kept any references to the third Evil Dead film out of the Starz’s show universe. Now that Campbell and the cast can utter phrases like “Shop smart, shop S-Mart!” at will if they want, who knows, maybe Ash will finally get the incantation right and end this whole fiasco. “Klaatu… barada…” Just kidding. Of course, he won’t. And let’s hope he never does.