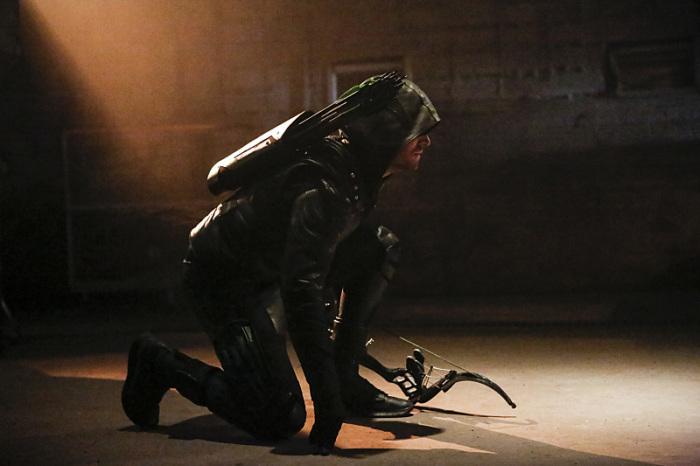 Despite the last couple of runs, there’s plenty of reasons to be hyped for Arrow Season 5. The CW has added to the list with a new batch of images from the premiere episode, Legacy. A few of them show off the villain, Prometheus.

The first few images give us a closer look at the flashbacks this season, which are set in Russia. Since these images are from the premiere, Ollie’s being with Anatoly seems to indicate we’re diving into the Bratva early on. Showrunner Wendy Mericle recently spoke on what can be expected from the infamous crime syndicate.

“We really wanted to go gritty, dark, and make it feel very real.” She continued, “we’re dealing with the Bratva, and the Bratva is, as we all know, a pretty interesting and messed-up institution. I might get shot for saying that, but hey!”

“Everyone on staff watched [the 2007 film] Eastern Promises. I watched documentaries about Bratva and how they operate in Russian prisons.”

That return grittiness also appears to be reflected in the present day. Chad Coleman’s character, Tobias Church, is seen giving a bound Oliver a hard time. But the new Mayor of Star City isn’t exactly being a boy scout, as he’s pictured with a gun, holding a man around the neck.

The real treat these new images offer is a better look at Season 5’s big bad, Prometheus. We know the show won’t stick too closely to the character’s comic book background. Which could be incredibly exciting, depending on how long his true identity is kept secret. A reveal akin to the Dark Archer’s in Season 1 or Deathstroke’s in Season 2 would be amazing.

Very little is known about where the show will take Prometheus. He has a grudge against Oliver, because of the hero’s actions in the first season. Whether or not those actions are in relation to him being a vigilante or his family’s involvement in the Undertaking remains to be seen.

The wait to begin resolving this mystery and more is drawing to a close. Arrow returns Wednesdays this fall, starting October 5.