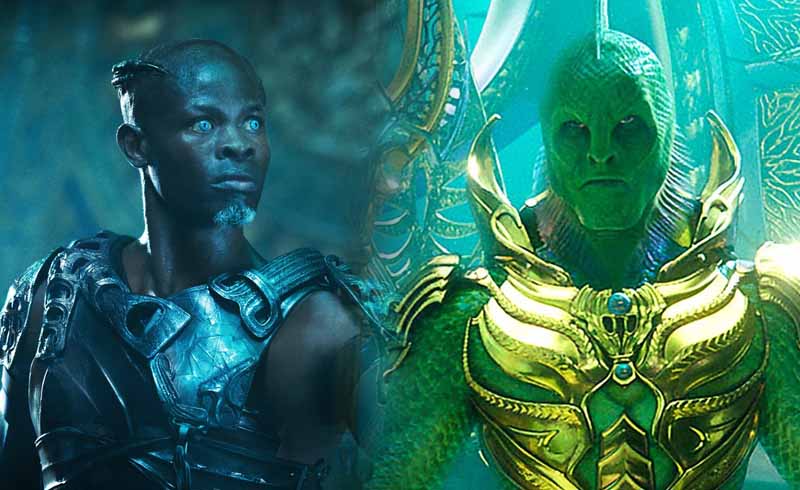 Djimon Hounsou may be appearing as the Wizard in Shazam! next year, but we’ll actually be seeing him as a different character in the DCEU this December. Entertainment Weekly just gave us a look at the Fisherman people from Aquaman, and Hounsou plays their king.

Here’s the official description of the scene:

In this scene, King Orm (Patrick Wilson, not shown) has gone to the Fisherman King (played by Djimon Hounsou, that guy with the trident — and more on that in a minute) to enlist his help to declare war on the ocean-polluting surface world. There’s also the Fisherman Queen (Natalia Safran) and Princess (Sophia Forrest) on the left, and a royal guard on the right. Though you can’t tell in this shot, all of them have tails instead of legs.

What’s interesting is, Hounsou isn’t the only Shazam! actor that will be in Aquaman. The actress playing the Fisherman Queen (Natalia Safran) will also be appearing in Shazam! as Mrs. Sivana, the wife of the villain Dr. Sivana played by Mark Strong.

With this picture in mind, you can’t help but wonder what kind of world James Wan is trying to open up with this movie. It looks like Atlantis is more than just the humanoid characters like Mera and Arthur Curry.

Producer Peter Safran had this to say about the Fisherman People:

“After the fall of Atlantis, some of the kingdoms evolved and some devolved… This is one that evolved. This is a kingdom that’s primarily artistic and cerebral, with poets and philosophers.”

Hopefully we get a better look at all the characters come SDCC 2018. Then again, it wouldn’t hurt to save some surprises for when the movie actually comes out.