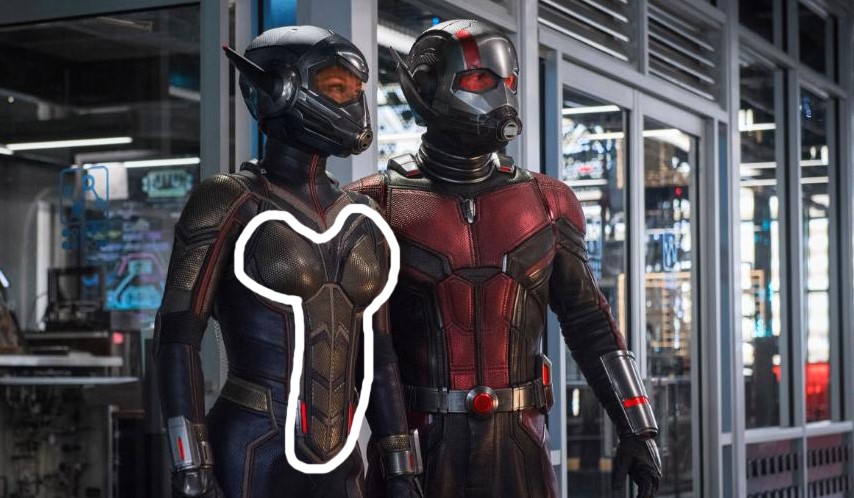 Marvel Studios has just released an image of Ant-Man with the Wasp, and though the suits do look cool, some fans in the internet have found a very unfortunate flaw in Wasp’s costume—there’s a giant penis on her chest.

Did nobody notice this when they were designing Wasp? pic.twitter.com/Rd669maE8P

While it certainly wasn’t that noticeable at first, a lot of people are suddenly getting the realization now that someone has pointed it out. Of course, there was the intention to have hidden images on the suits, but certainly, nobody meant for a penis to be there.

Someone on Reddit pointed out that Wasp's costume looks like she has a giant dick on her torso and now I can't unsee it. https://t.co/Ezi8Ps1xX8

I find it REALLY hard to believe that not a single person noticed the design on the front of Wasp’s suit looked like a penis pointing right between her legs… 😒 pic.twitter.com/ojwRm7RXSH

As for the original hidden message in the costumes, Ant-Man and Wasp are supposed to have the faces of the insects they represent on their chest. Check it out:

Both Antman and Wasp’s costumes include the insect heads their character is based on! from marvelstudios

For now, it would probably be best for Marvel that this whole “discovery” is kept quiet, but the internet the way it is, everyone will be talking about it whenever the topic of Ant-Man and the Wasp comes up. And the image is certainly hard to unsee once it’s pointed out to you.

The way I see it, if Marvel really wants to get rid of the penis, they can “shorten” it by coloring in the yellow panels in the front. Personally, I think it would be funnier (and more cost-effective) if Ant-Man himself just points out that Wasp looks like she has a giant dick on her chest. It would totally be in character for Scott Lang, and it would show the audience that the movie is aware of the design flaw.

Ant-Man and the Wasp is set to come out July 6.