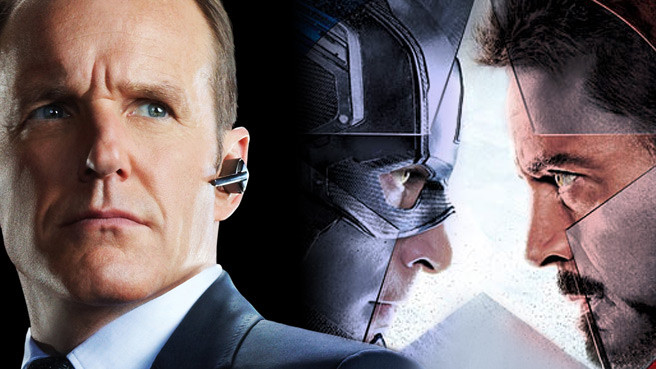 Agents of SHIELD is tackling the impending Civil War in the Marvel Cinematic Universe head-on. As the premiere of Captain America: Civil War draws nearer, things are really starting to heat up in regards to choosing sides: attempt to control the powered population due to the potential threats they pose or allow them to live in privacy and peace as all other global citizens should be allowed to do.

You could see the chinks start to appear last season on Agents of SHIELD when Daisy (Chloe Bennet) first acquired her powers. The team began to divide on how best to handle this change. Agent Jemma Simmons (Elizabeth Henstridge) in particular wanted Daisy contained while others felt that was unjust. Since then, as the population of Inhumans and other powered people seems to be growing rapidly, the judgments on how to handle the surge build on both sides of the argument. This is, of course, the key conflict in Captain America: Civil War.

“I think it’s something that’s gone on since the end of last season, when Coulson made Mack and Daisy partners. One’s an Inhuman, and one seems to be the most suspicious of aliens and Inhumans. That division is very much manifested in our team. Our show is looking at this Inhumans outbreak, and that’s really where the concept of a civil war — our own version of it — is happening. For my money, our focus is very much on dealing with it within our own show. It seems logical, from what I know about “Civil War,” that that’ll have repercussions on our show.”

Of course the interesting thing that many have touched on is the fact that the crux of Civil War seems more relevant than ever given our current political and social climate in 2016, despite having been published ten years ago. This parallel hasn’t escaped Marvel’s attention.

“When you think about what’s going on in the world around us, Marvel really shines when things in the real world are put through a prism that then takes you back out to the other side. Right now, I don’t ever remember a time where the feelings about race, and religion, and gender, and tolerance towards man, and man’s intolerance towards man, hasn’t been so much on the front burner, that we’re going to have to figure out how to get along. We’re going to have to figure out how to understand that, just because people are different, [it] doesn’t mean that they aren’t our friend. That, in its heart and core, is what we’re doing with the show.”

It’s definitely easy to see how the show is running perpendicular to the upcoming film, much as it did two years ago with Captain America: The Winter Soldier and the unveiling of HYDRA within the ranks of SHIELD. In fact, try to watch an episode without the urge to yell, “Civil War!” every time the question of how to best handle powered people comes up.