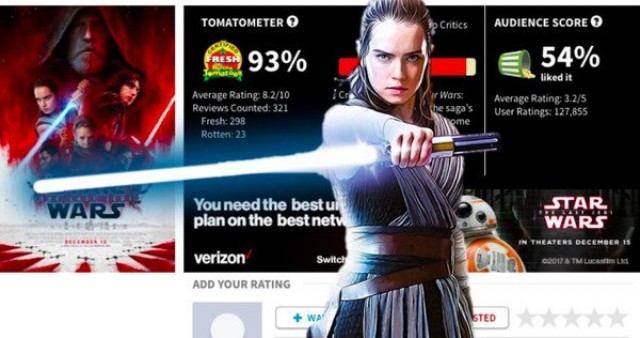 The hype for Star Wars: The Last Jedi was huge, and fans were expecting a lot after The Force Awakens. Fans were especially hyped after seeing positive reviews from critics (you can read ours here) which earned it a 93% aggregate score on Rotten Tomatoes. However, since the release, the difference between the fan score and the critic’s score grew wider with each day as fans expressed colossal disappointment. The let down of the film spawned 100’s of online petitions among fans, and the latest one demands that Rotten Tomatoes shut down to the different scores between the audience and the movie. Fans are now claiming Rotten Tomatoes is flawed, and there is apparently a problem with their system especially after last weeks release of Bright which critics panned, but audiences loved.

Now the petition, with over 265 signatures (at the time of this writing) posted on Change.org, explains that the site which compiles information from hundreds of reviews from qualified sources should be shut down for giving information which he considers inaccurate.

Rotten tomatoes has a very flawed aggregate rating system.Take for example the Critic’s Ratings  for Star wars The last jedi (93%) , Ghostubusters(73%) and Sharknando(82%).All of these movies got high ratings but from audience these movie got very low ratings.These movies are extremely hated by fans and general public. And most of the critics on RT gives favourable reviews to Disney blockbuster movies.One RT critic from collider bashed the fanbase who hated the last jedi during a Youtube vlog. Many critics on RT are extremely toxic and they are unprofessional. The critics from outlets such As mashable,collider, screen junkies, THR, forbes, Indiewire are extremely toxic on social media and unprofessional with their reviews.

RT has a very flawed  aggregate rating and broken system. 3/5 score for a disney film is listed a fresh/good review and the same 3/5 review score for non disney blockbusters are listed as rotten/bad review. The tomatometer system is extremely broken and unreliable. For example if a movies has aggregate critics rating score of  6/10 and another movies has 9/10 aggregate critics score. Both movies will have 90 percent on tomatometer. RT is a horrible review aggregate site and very unreliable. IMdb and metacritic ratings is more reliable site for movie reviews.The broken Rotten tomatoes system can hurt the movie industry Becuase most of the audience watch the movies based on RT score. And their broken system is like cancer to movie industry and audience. In short RT will be plague for non disney movies as RT score dosnt accurately tell which movie is bad, average or good.

The last petition which asked Disney to remove The Last Jedi from canon received over 60,000 signatures before the creator of the petition came to regret his petition and took it down. The staggering amount of negative responses from fans for the Last Jedi might even be worse than what we saw from the prequels, and those were actually bad. With way too much Jar Jar, but it is what it is, and we think that no matter what fans do or say most of these petitions are a joke and won’t get taken seriously, but should they?

Star Wars: The Last Jedi is now showing in theaters.