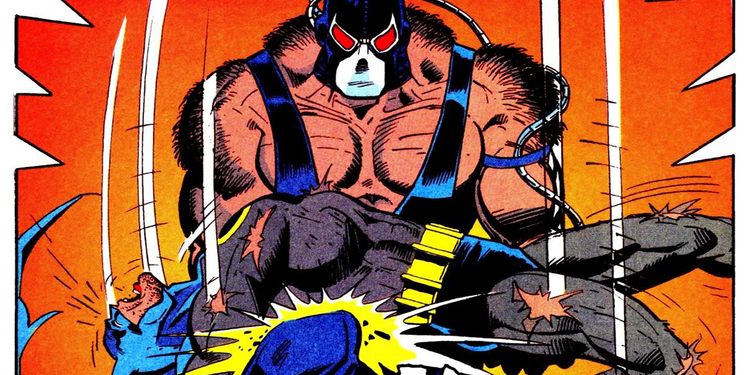 Knightfall is a storyline most are very familiar with, as it inspired The Dark Knight Rises. This is one of the arcs that introduced Bane, where he systematically weakens the Bat by releasing Arkham Asylum’s patients. This lasts for several weeks with Batman putting them away one by one, while mentally and physically losing strength. When the trying job is complete, Bane ambushes Batman at Wayne Manor, and effortlessly beats the exhausted hero, ending their one-sided battle by literally breaking the Bat.

Bruce is paralyzed and leaves town to be rehabilitated, assigning protege Jean-Paul Valley the mantle of the Batman. Long story short, Jean was indoctrinated at birth to be a trained assassin. Bruce took him under his wing to teach him restraint, assuming he was getting through to him. For a while, Jean watches over Gotham carefully, until an encounter with Scarecrow’s fear gas awakens his instincts.

Jean’s Batman is violent, so much so that Gordon and criminals catch onto him not being the Caped Crusader they know. When a healed Bruce returns, he discovers the horror the new Dark Knight has left in his wake, and works to defeat him.

We’ve somewhat seen this in Arrow with Deathstroke, so how could it be better explored?

The Green Arrow has made many enemies over the years. Since we still don’t know everything about the island, there could be another foe waiting in the wings. Someone patient, who has studied the vigilante, and considers the Darhk aftermath the perfect time to strike. Unleashing various criminals in Star City, and leaving Oliver to combat them, would provide an interesting set up, giving the villain-of-the-week trope greater purpose.

Midseason hits and the villain ambushes our hero in the Arrowcave, or Felicity’s loft, and breaks him.
The last half could see Roy Harper’s return (already confirmed) and him becoming Green Arrow. The foe would then be his to handle, and may offer the Oliver Queen absence fans were expecting in Season 3’s last half.

Roy doesn’t have to go on a violent rage, been there done that, but this enemy could be so threatening that, a la TDKR, Oliver is inspired by the havoc being wrecked. Knowing of the ensuing disaster, he gets rehabilitated, and returns in time for the final fight sequence fans have been aching for since Deathstroke and the Hood went toe to toe.

Next: Craziness will surely ensue…