3. A Crooked House for a Crooked Man 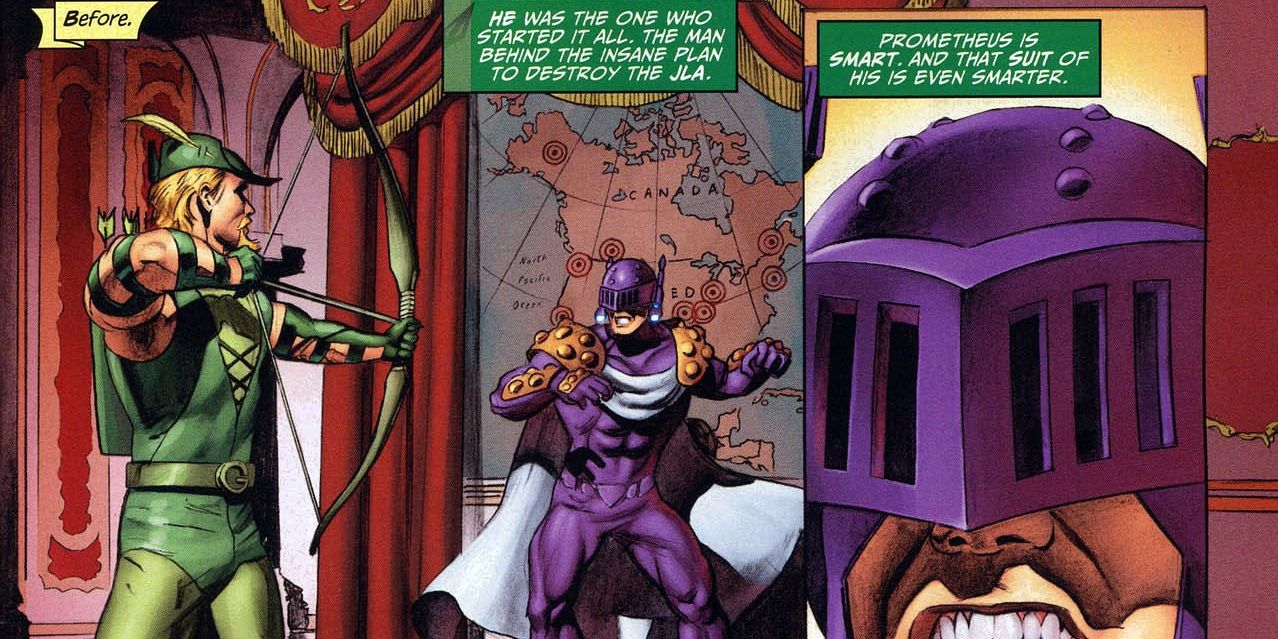 At the end of Legends of Tomorrow, Hourman introduces the Justice Society, and warns of an impending threat. What that threat could be is anyone’s guess, but Marc Guggenheim teased Season 2’s baddie would make Vandal Savage look pitiful in comparison. What DC villain could pose such a formidable threat and not be Doomsday, Darkseid or one of his ilk? Prometheus.

The character has a troubled backstory as the son of two criminals, who, like Bonnie and Clyde, are gunned down by police and killed. In despair, the nameless child vows to exact vengeance on all forms of justice. His parents leave behind riches, and with it he takes off to travel the world, obtaining the best in education, and combat, military, and technological training. Sound familiar? Eventually he discovers Shambala (yes, Uncharted 2‘s lost city), and trains with the monks who grow to love him. The leader shares secrets of an alien ship beneath the monastery, where the would be Prometheus also learns of the Phantom Zone.

Taking refuge within the Phantom Zone, he garners the power to dismantle the Justice League. He even bests Bats in hand-to-hand combat, thanks to a device hidden in his helmet that allows him to download and mimic the fighting style of the world’s greatest combatants, including Batman.

When the League catches up to him, Batman has Martian Manhunter trap Prometheus in his own memories, leaving his body in prison. The Martian’s later killed, allowing his to prisoner escape. Of course, Prometheus blames the JLA for his mental state and the years lost; in an act of revenge he lays waste to Star City killing millions of civilians. When it’s over, he returns to his hideout, is ambushed by the Emerald Archer and killed with an arrow to the head.

Because Arrow is the Arrowverse’s Batman, it could work, especially since Supergirl and Martian Manhunter are involved. Midseason four-way crossover material, anyone? The first half of Legends could see Prometheus as its main villain, shrouded in secrecy, but still a devastating foe thanks to the trouble he may have already caused the JSA. This bleeds into Arrow, where the character is revealed in the crossover episode. From there Green Arrow, a la Batman, has Martian Manhunter trap the villain in his own mind.

Once the shows return from hiatus, he breaks out, though the Martian doesn’t have to die. Prometheus would then be lose in Star City, an intellectual threat always a step ahead — something the show hasn’t had since Deathstroke. This arc could last until the finale, where Arrow ambushes him in his hideout, and delivers the death blow that once led to the League hunting the hero for his crime.

Prometheus would be the perfect addition. His brand of villainy could unite the Arrowverse Justice League for the first time. He’d not only be a foe to the heroes, but his genius level intellect would mean he’s quite the match for Felicity and Curtis, too.