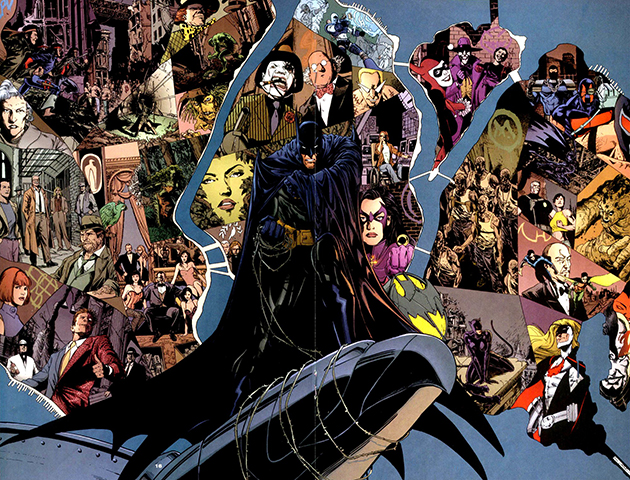 After the decision made by Barry Allen during The Flash’s Season 2 finale, which teases a Flashpoint arc, time may have been reset on Arrow, as well. Amell has said that despite this change, the show will remain grounded, but it could provide an excellent launching pad for No Man’s Land.

Following a massive earthquake, the Cataclysm, Gotham City is quarantined, barred from the United States and declared a no man’s land. A lot goes on, so boiling it down is best.

To garner support for the city, Bruce Wayne leaves to seek governmental aid, meaning the Batman is missing during Gotham’s darkest hour. Citizens and the police lose faith in the Bat, as Gotham’s overrun by Arkham escapees and other high-profile criminals. Money is of little use and power is given to bosses of the most formidable gangs, i.e. Two Face, Penguin, and various others.

In Batman’s absence, the Huntress adopts Batgirl’s mantle, and in some instances Batman’s. Following in the footsteps of the gangs, she leaves bat symbols to mark her territory. Eventually he returns to retake the cape and cowl, and has his work cut out for him with the city suffering through anarchy.

Oracle, without sufficient technology, is forced to maintain some semblance of order. She documents dates and events, uses emergency phones and contacts to gain intel, and crafts maps of the city and gang territories. Over time, Lex Luthor steps in to lend a hand, by both legal and illegal means, to re-establish Gotham and rebuild it.

How would this suit Arrow?

Because of a potential Flashpoint arc, fans are speculating a Thomas Wayne reversal, where Robert Queen witnesses his son’s death on the island and returns home as a murderous vigilante. Something already alluded to when Barry and Cisco arrived on Earth-2.

Therefore, it’s possible the changes made to Arrow’s timeline could still see Oliver donning the hood. Where Season 4 leaves off with Team Arrow diverting Darhk’s missiles, Season 5 (in a Flashpoint world) could begin with the revelation that Felicity and Curtis were too late. Instead of directing all of Darhk’s missiles into space, perhaps one goes stray and they fail to redirect its course. It hits Star City, and boom, no man’s land. An Arrow-less Team Arrow spends a portion of the season’s first half with Mayor Queen off to the US government for aid.

This could bring back Laurel, alive in a Flashpoint arc, or Thea. With Oliver gone, one adopts the Arrow mantle, while Felicity does the work of Oracle from No Man’s Land. With gangs to deal with, territories to free, and prison escapees taking advantage of the lawlessness, this storyline could last a season, if done right.